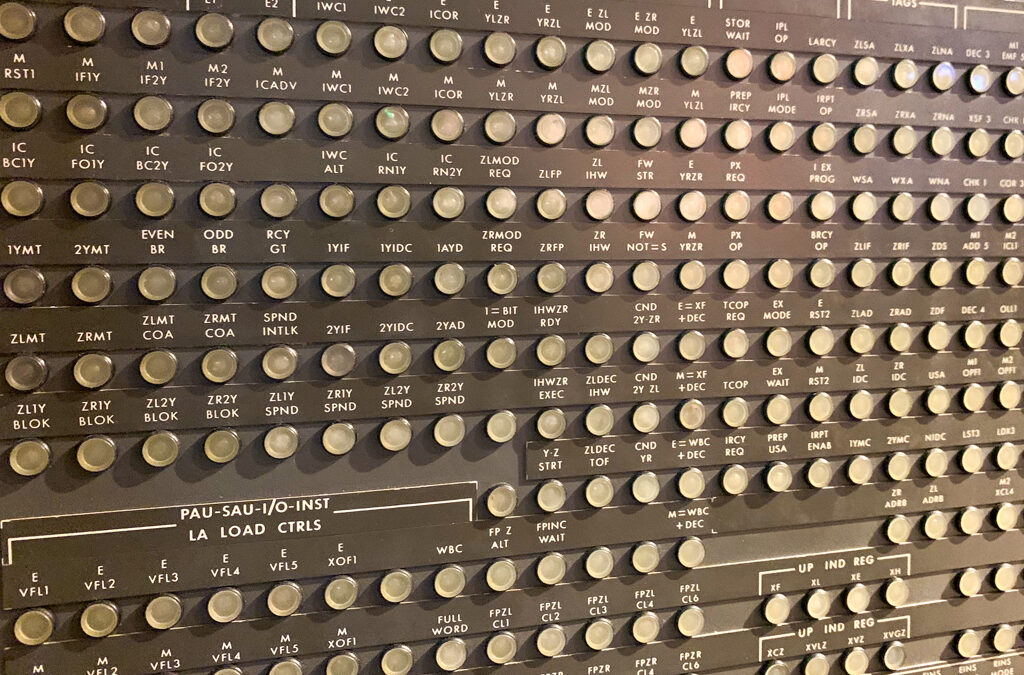 This post first appeared on chrisandelise.com and is republished here with permission.

My interest in computing and technology goes back a long way. I was fortunate enough to attend a grade school where there was a computer in every classroom at a time when that was not at all common. Looking back now, I am fairly certain that some of my teachers were terrified of doing something wrong and breaking them. Even as a young kid, I could sense that they had a certain reverence for those then new and mysterious machines. Maybe it was this fear/awe of the computer that first piqued my interest.

However it would be a long time before I regularly used a computer and an even longer time before my parents got the family a computer. In the meantime computers would fuel my fancy. Seen on television or in film, it was always a bit unclear what exactly they were doing, but the potential of their power was made clear. Though the possibilities of computers were clear, we know the reality of how computers are portrayed in popular media: hacking into the mainframe, rerouting the encryption, computer word, computer word, motherboard, RAM, USB, microchip. But it was this utter cluelessness that the media had about computers that in one very important way always made computer scenes in films and television stick out in my head: the placement of unrelated, unnecessary, but completely cool looking hardware. Every scene involving a computer was littered with technology that the directors clearly didn’t know the first thing about other than the more flashing lights the better. Ferris Bueller’s bedroom crammed full of tech including an original IBM 5150 PC and the IMSAI 8080 with its 8 inch floppies as well as the massive WOPR in War Games. The warehouse full of reel-to-reel tape drives in First Blood Part 2. The Atari Portfolio and IBM Sytem/38 in Terminator 2. It was always a mise-en-scène of ridiculously superfluous hardware porn. And I loved it.

When I finally got my own computer, I was more convinced than ever of how I wanted to make technology my livelihood. Though the magic of the tech industry as a whole has lost its luster, I still am optimistic about the potential of technology to improve our lives. And I am still enchanted by old computers and continue to watch those classic sci-fi films in part to see the vintage hardware. To this day, I get just as excited about seeing the Control Data mainframes in Die Hard as I am to see Hans Gruber thrown from Nakatomi Tower.

But these scenes of old iron computing represent technology that is decades old. Even in those films of my childhood they were often already out-of-date and were only there because they looked cool and were cheap to procure. Unlike fine art, classic cars, historic aircraft, or even designer furniture, there are very few places one can go to see historic computers. The Deutsches Museum has a pretty good collection and there were some interesting selections in the computer science departments of the universities where I studied. For that reason I was excited to finally be able to go to the Computer History Museum, not only for its world-class collection of historic computing artifacts, but because it had a killer feature that no other museums had: a working IBM 1401 mainframe computer.

Just taking the train to the museum was a tour through some of the most important locations of the development of modern computing: Menlo Park, Palo Alto, Redwood City, Mountain View, Santa Clara, San Jose. The museum itself is expansive and comprehensive. From abacuses and slide rules, to remains of the ENIAC, to an Enigma cipher machine, to a UNIVAC, to sections of the SAGE system, to an original Apollo 11 guidance computer, to multiple Apple 1s and Alair 8800s, to a Cray-1, the place had it all. It was fascinating to see and learn about so many important milestones in computer history. But like most museums it was all behind glass, keeping you frustratingly removed from the history the exhibits represented.

But then there was the IBM 1401 demo lab. Just entering the room whisked one away to another time. Walking up the ramp you are hit by the chilled air of the room, harshly lit by overhead florescent tubes due to lack of daylight since windows make cooling the space inefficient. Oh, and you walked up a ramp because just like a traditional data center, the floors were raised to allow for the cabling between the machines and distribution of the refrigerated air. And it was LOUD. Even with the machines idle, the fans cooling the main processor and memory units as well as the tape drives droned on as an ever-present din. And it SMELLED like a mainframe with a combination of heated electrical components, lubricating oils, and paper dust mixing together completing the atmosphere of the room.

It is one thing to read about these vintage machines and study their history, specs, and features. It is another thing entirely to experience them viscerally. To see how it actually was to use one of them and see the blinking control panels, hear the card punch and collator, and feel the skull-rattling vibration of the line printer was so much more thrilling than just understanding the computer as a theoretical abstraction. The volunteers who gave the demonstration were retired electrical engineers who cut their teeth on the 1401. But even they admitted that the 1401 was a bit boring as far as mainframe computers go. Just like a first love however, they were still enamored with their first computer. And IBM ended up selling 16,000 of them between 1960 and 1971 after planning that they might sell 5000, making them one of the most successful and important computers at the outset of modern commercial computing, boring or not.

Playing their old roles of computer operators, the volunteers keyed punch cards on an IBM 026 key punch, collated them on an IBM 077 card collator, loaded them into the IBM 1402 card reader/punch, and watched them process on the 1401 main processing unit, with each action adding to the musical cacophony of the room, ending in a nerd crescendo of near-deafening output on a classic IBM 1403 line printer.

Between steps in the process, they explained to us the functions and features of the 1401, passing around samples of the solid-state logic modules and vials of the ferrite rings that made up the core memory. I can not explain the geek joy that I felt as I held this history in my hand.

Then we all got our chances at the keypunch to type our own punchcards and have them processed by the 1401. With child-like excitement, I waited to see my name printed on the classic greenbar paper. It is hard to put into words the delight I felt being able to not only see this machine in operation but to actually use it. What I can elucidate is that my face hurt from smiling with delight.

I have been fortunate enough to have enjoyed some amazing experiences in my life. My travels have taken me to wonderful places and I have met fascinating people. And with some luck, that will continue. So it may seem incongruous that given my adventures so far that I was seemingly disproportionately delighted with seeing some obsolete computers. The thing is, I always knew that travel was possible. As a kid, I knew that exciting countries and destinations were going to be there when I grew up. I knew that I would be able to eventually travel and meet fascinating people. However I never thought that I would have a chance to experience that slice of time that was the birth of modern computing. Sure, maybe I could see a nonworking piece of a mainframe at the odd science and industry museum, but I never thought that I would be able to see one in operation. I never imagined that I would be able to sit at one and truly be able to understand just what it was like to operate one.

So yes, my delight was real, profound, and a smile still comes back to my face when I think of watching my stack of cards being processed. I can’t wait to go back. They have working PDP-1, too.